How it all began …

The company ES Equipment AB is an offspring from an EU-project. The ambulance nurse Björn Åhlén had had a mission to equip Räddningsverkets international Chemical Reaction Force. Soon he realized that the scissors available for opening clothes to make livesaving efforts were far away from optimal for that task.

In connection with a large decontamination exercise it was obvious that the scissors were very inefficient cutting clothes.

– A big accident with a lot of people injured demands a more efficient tool. Using scissors takes far to long time and there is a major risk to injure the patient when cutting the clothes. The capacity of the decontamination work becomes low and patients badly injured or with serious medical conditions risk to die, says Björn Åhlén.

… and how it continued 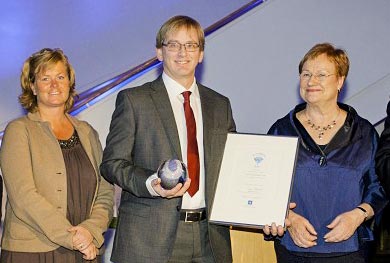 Martin Bergstrand receives the award Quality Innovation of the Year 2001. Dispenser was the Finnish president Tarja Halonen. To the left, Charlotte Brogren, Director General of Vinnova, the Swedish government agencies of innovations.

He started to think of a better solution and in 2004 he came in touch with Mats Fridh who worked in an innovative programme and soon a develop project had taken place. Some agencies gave their specifications for the demands. The ingeneer Martin Bergstrand who was involved in the project was given the task to compile all specifications and develop a proposal solution. The first concept was introduced and gave high notice within the agencies. The S-CUT cutting tool was about to develop!

Today S-CUT is an unique series of products that replace scissors and knives, among all in rescue veichles. S-CUT can be used by both right- and left handed and thick gloves is no obstacle. It slightly cuts through most fabrics, even in several layers.

In 2005 the company ES Equipment was formed by Björn Åhlén, Martin Bergstrand and the emergency nurse Mimmi Olsson. The company works to further develop, market and sell S-CUT worldwide.

In 2007 the first S-CUT was sold outside the Swedish borders and the business started to move on. S-CUT became more and more known and appreciated and in 2011 it was rewarded with Quality Innovation of the Year by SiQ, the Swedish institute of quality development that every year appoints a product or a method.

In 2012 the S-CUT family was extended with a model for people that handle horses, S-CUT XC-E. In 2013 the company was reinforced with Stephan Nilsson who took over as CEO.

In our broschure you can read about the CE-marked S-CUT models and how they are used in real situations. Download it here